In the course of their work, actuaries consider and study uncertain events and make assumptions about probabilities of these events occurring. For example, the probability of a person of a given age dying within the next year is what is known as an “age-specific mortality rate.” Another way to look at this is that the estimated likelihood of a person living to the next age is 100% minus this age-specific mortality rate.

In general, a mortality table is composed of age-specific mortality rates for a range of ages, usually from birth to the oldest age to which anyone is expected to survive. These tables are also sometimes called “life tables.”4 While many actuaries use mortality tables for different populations in the course of their work, life expectancies are not directly used in actuarial practice; rather, they are a separate output of the underlying mortality tables.

Mortality tables are created by tabulating observed mortality experience data from large populations. It is well established that different populations may experience very different survivorship expectations, based on the population’s characteristics. Many factors can affect mortality rates, several of which are highlighted in this section.

First, by their very construction, mortality tables recognize the obvious factor of age.

Another well-established and well-known factor is gender because, as a group, females tend to live longer than males. Most mortality tables are constructed showing distinct probabilities of death for males and for females.5

Other factors that may be reflected by constructing separate tables or by developing other adjustments6 include socioeconomic status, level of education, race, occupation, health status including body mass index, level of physical activity, smoking status, other lifestyle-related factors, and geography.

How mortality experience in the U.S. has changed over time

U.S. population mortality rates have generally decreased over time. As mortality rates decrease, longevity and life expectancy increase. Over the past decade, this trend of longevity increases has stalled, with life expectancy at birth virtually unchanged between 2010 and 2018,7 due largely to the effects of factors such as an increased use of opioids and the prevalence of obesity offsetting the generally positive trend. Meanwhile, more affluent segments of the population have continued to experience increases in life expectancy during this period.8

Historically, gains in longevity can be tracked to simple improvements in living conditions, such as the use of clean water and waste removal. More recent factors that resulted in increases in longevity in the U.S. include advances in medicine (for example, the development of antibiotics), expanded access to health care through introduction of Medicare and Medicaid, continual and general improvements in education, health awareness, reduction in smoking rates, and improved standards of living.

Opinions vary among demographers, actuaries, academics, and other professionals who study and analyze mortality and associated trends as to whether the historic longevity improvement trend will resume and, if so, at what pace. In addition, the COVID-19 pandemic has produced at least a temporary dip in the trend of increasing longevity. The long-term consequences of this pandemic on mortality and health status are largely unknown at this time. Some speculate that long-term effects of COVID-19 could continue to increase rates of mortality relative to pre-pandemic levels, while others believe that medical advances driven by the pandemic, such as development of vaccines, could lead to greater improvements in longevity.

The relationship between mortality rates and life expectancy

The concept of probability is commonly used to quantify unknown and uncertain events. For example, using a mortality table can help a 65-year-old evaluate their chance of celebrating their next birthday. Computing a life expectancy is a statistical process of “collapsing” a series of age-specific survival probabilities into one number that represents the expected number of additional years a person might live.9

The mathematics behind the calculation of life expectancy uses the concept of “expected value” of a person’s future lifetime. The word “expected” communicates that the computed result is not a fact; it’s what is expected on average. For example, if an actuary tells you that a 40-year-old has a life expectancy of 41.7 years,10 it does not mean that the 40-year-old will live to age 81.7 exactly. Some individuals, age 40 today, will die before that age while others will live past that age. But if we tracked the future lifetimes of 100,000 people who are 40 years old today, we would expect that upon the recorded death of the last of the group, these 100,000 people will have lived an average of 41.7 additional years.

Another issue that may cause confusion is that life expectancy measures for U.S. populations are often reported for the population as a whole, blending many characteristics that influence mortality into a single reported measure. Life expectancy can be reported for a combined population of males and females, covering individuals living in different parts of the country, and reflecting different socioeconomic characteristics.

Yet another complicating feature of this measure is that when reporting life expectancies, many—including the CDC in the report cited above—illustrate these values as of different starting ages. It is common to track life expectancy at birth, as well as at other ages. And, because (for example) a 40-year-old person has already survived from birth to age 40, the 40-year-old’s expected age at death will be higher than the expected age at death for a newborn (or for anyone who is younger than 40), because the life expectancy for a anyone younger than age 40 must also incorporate the possibility that they may not survive to age 40.11

The group of 40-year-old people discussed in the previous example is a “cohort” because they were all born in the same year. Computing the life expectancy for a cohort can be done by tracking the group from the time analysis is begun (in this case, age 40) and continuing as the number of years each member of this cohort lives is recorded until the last death of the group is recorded.

If actuaries had a way to peer into the future so that they could observe the actual ages at death for each cohort member, the cohort life expectancy for this group could be calculated as the average of observed life spans. For historical cohorts, such as for those born in 1880 who were alive and age 40 in 1920, average life span may be calculated from historical records.

For a cohort of current 40-year-old people, actuaries routinely use actuarially developed mortality tables to determine the number of years members of this group are expected to live. As discussed earlier, the mortality table is typically developed from experience for a relevant population for a particular period. In using this table to determine life expectancy, this approach assumes that the mortality rates measured in this period apply to all future years.

To estimate period life expectancy in the recent report, the CDC used mortality rates for the general U.S. population for 2020. This means someone who is 40 years old in 2020 is assumed to experience these mortality rates in all future years. In 25 years, for example, when this person is 65, they are assumed to have the same mortality experience as someone who is age 65 in 2020. This methodology of life expectancy calculation is a standard approach that the CDC uses when reporting life expectancy figures, and which is widely cited.

To develop an estimate more aligned with a commonly accepted understanding of how long people alive today are expected to live, this standard approach is refined by incorporating mortality improvement or changes over time into this calculation. Any such projection depends upon the assumption that future mortality rates will change over time. This assumption will have a significant effect on life expectancy.

It is instructive to review the impact of calculating life expectancies on a cohort basis, rather than a period basis, for these three cohorts of male newborns in the late 1910s. Using mortality rates published by the SSA for years after 1917, for a cohort of 1917 male newborns, the average life span was 59.4; for the 1918 cohort, average life span was 60.0; and for 1919, it was 61.5. Even these differences are heavily influenced by the fact that the 1917 and 1918 cohorts had to survive the high rates of death during 1918, while the 1919 cohort did not.

This table, as well as the graphs that follow, use historical and projected U.S. population mortality rates published by Social Security Administration in conjunction with the 2020 Trustees Report. 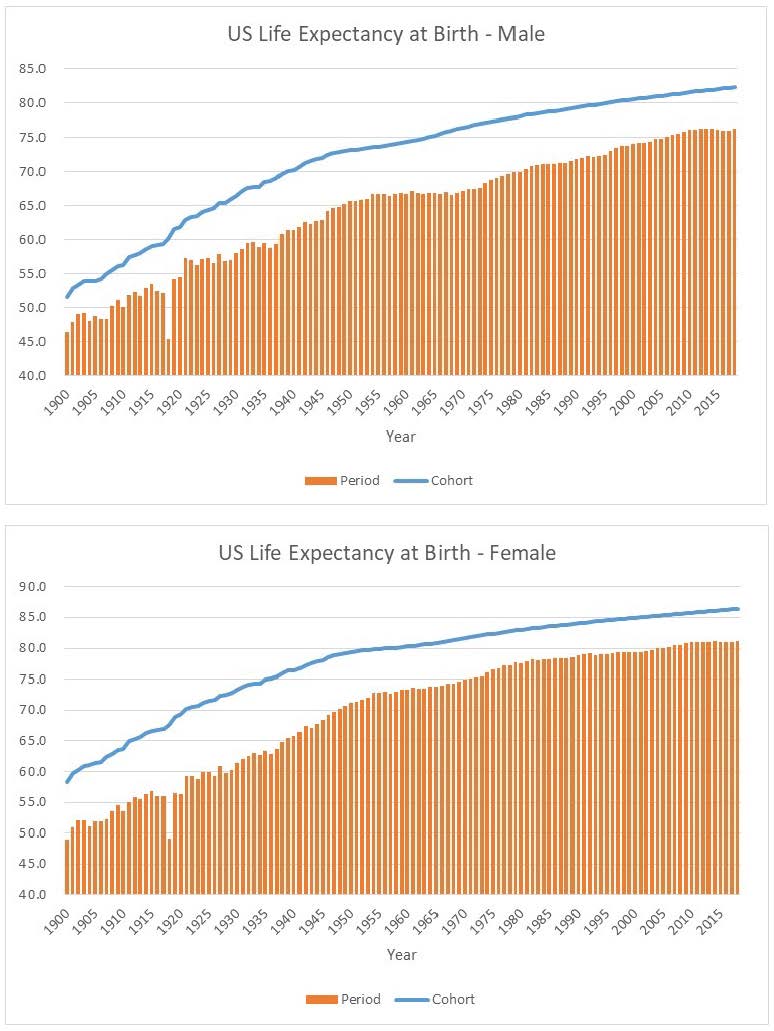 How not to interpret life expectancy

Life expectancy can be a confusing concept and is often subject to misinterpretation and misunderstanding. An individual may conclude that the expected life span they hear about or read about is a prediction of the exact number of years they can expect to live, and that the CDC’s recent report means that they will not survive as long as they may have expected previously. In fact, however, anyone alive in 2021 reading about the CDC report will already have survived the high rates of mortality experienced during 2020.

How temporary phenomena, such as a pandemic, affect life expectancy measures

The long-term effect of COVID-19 on longevity is as yet unknown. If the effects are temporary and rates of mortality return to pre-pandemic levels and continue to improve in line with historical trends, period life expectancy measures reported by the CDC should see a corresponding rebound. The COVID-19-related effects published thus far by the CDC are, as noted in this issue brief, period life expectancies, which assume that current conditions continue indefinitely and have thus decreased during the pandemic. If pre-COVID-19 mortality rates return, the CDC’s measure of life expectancy should increase in future years. Cohort life expectancy, which is more heavily influenced by long-term expectations, will likely see at most a small change in response to any temporary increase in mortality.

The considerations discussed in this issue brief highlight the need to carefully consider the meaning of life expectancy trends, COVID-19-related or otherwise. The American Academy of Actuaries Pension Committee has produced this issue brief to provide useful information to help the reader better understand the complexities involved in the measurement of life expectancy estimates.