The terrorist attacks of Sept. 11, 2001, profoundly affected Americans in many ways, and also had lasting economic effects on insurers and the U.S. economy. The attacks produced the highest amount of claims paid by insurers in U.S. history to that date, and led some insurers to exclude terrorism acts from commercial coverage because of the difficulties in assessing the risk.

Congress in 2002 passed the Terrorism Risk Insurance Act (TRIA), which made the federal government the reinsurance backstop for losses resulting from a terrorist attack when claims exceeded a certain threshold. The law paved the way for insurers to expand the availability of terrorism risk insurance.Over time, premiums have fallen in price, and the federal government’s cost for the program has been relatively small so far. The program temporarily expired at the end of 2014, but Congress enacted legislation to renew the program through 2020 and President Obama signed it into law in January 2015.

Without a TRIA backstop, insurance rates or contract exclusions for terrorist events would likely be higher. And although government officials have worked to reduce the potential for a major terrorist attack in the United States, the possibility has not been eliminated. If the program were not in place, terrorism risk insurance rates would be expected to rise unpredictably or might not be offered in some regions or to specific properties.

How Terrorism Insurance Is Different

Many insurance sector observers and experts argue that the federal government needs to stay involved in terrorism risk insurance because the risks are unlike typical property and casualty risks. Several factors make it very difficult for the commercial industry to measure the risk of terrorist acts and consequently price insurance products.

Difficulties in measuring frequency of claims

Insurers use large data sets to measure the frequency of auto accidents, property claims, or other events to calculate the insurance risk. Even hurricanes and earthquakes occur often enough to provide measures of frequency, and that data can be augmented with catastrophe models. Terrorist acts, however, are relatively rare, which makes calculating their frequency difficult.

Wide range in severity of claims

The potential damage from a single terrorist attack, particularly in large cities, could be sufficiently large that it would bankrupt one or a group of insurers. Damage from a large chemical, nuclear, or biological attack could cost as much as $42.2 billion in a city the size of Des Moines, Iowa, or $778 billion in New York, according to a 2006 report from the Academy’s Terrorism Risk Insurance Subcommittee. No insurer or group of insurance companies could risk exposure to this magnitude of loss.

As a general matter, insurance succeeds by spreading the random cost of losses across a large number of insured. But terrorist attacks are designed to maximize economic and psychological impact, and consequently do not occur at random times or places. Historically, they are more likely to occur in large cities, at specific targets, and perhaps even on specific dates. Because they are not random, terrorist attacks make insuring specific types of properties or locations much riskier than insuring against other risks.

Terrorism risk is unique in that perpetrators are able to change the source and target of their threats in a way that earthquakes and other natural perils cannot. This reduces the ability of property owners to lessen risks and is a key reason why some type of federal involvement in coverage of terrorism risks has been deemed necessary. 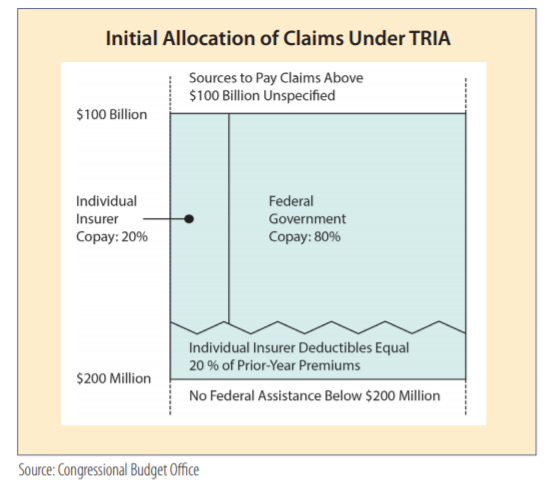 Congress recognized the need to continue the program to prevent significant disruptions to the insured, insurance market, and overall U.S. economy, but made changes when it reauthorized TRIA in 2015. The federal government’s share of insured loss that exceeds an insurer’s deductible is set to incrementally decrease from 85 percent to 80 percent, and the insured-loss amount that triggers federal involvement will incrementally increase from $100 million to $200 million by 2020. TRIA’s renewal maintains the certainty created in the marketplace in the aftermath of the Sept. 11 attacks.

Additional Resources from the American Academy of Actuaries