WASHINGTON—As peak wildfire season approaches with the kickoff of summer 2019, a new issue paper from the American Academy of Actuaries examines the key challenges and information that property insurance consumers, insurers, public policymakers, and other stakeholders need to know about wildfire risk.

“California’s devastating 2017 and 2018 wildfires were a wake-up call to all potentially affected by or tasked with addressing wildfire risk,” said Kay Cleary, chairperson of the Academy’s P/C Extreme Events and Property Lines Committee, which authored Wildfire: An Issue Paper—Lessons Learned from the 2017–2018 California Events. “Wildfire risk has been heightened by a substantial increase in recent decades of areas where human development is adjacent to or mixed in with undeveloped wildland. More wildland-urban interface means more wildfire risk, and more people who need to be aware of it.” 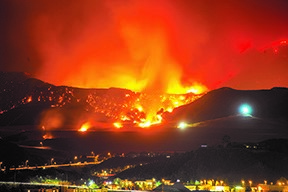 Caption: The geographic expansion of the wildland-urban interface is a key factor in the expected rise of the number of wildfires, often caused by human activity in these areas. Photo credit: iStock.com/FrozenShutter

Nationally, the geographical area of wildland-urban interfaces grew from 7.2 percent of the contiguous United States in 1990 to 8.5 percent in 2000 and 9.5 percent in 2010. Steps to help address this growing risk include stakeholders familiarizing themselves with the best information on the conditions of fire hazards, causes of wildfires (approximately 90 percent are caused by people), and approaches to reducing risk such as implementation in higher-risk areas of fire hazard plans or building codes and standards designed for this risk.

In the future, the paper notes, improved technology could help make projections of wildfire losses better. Better claims data and improvements in modeling, supported by changes in insurance regulations, could lead to more accurate understanding of the risk of particular properties and to better pricing of this risk by insurers. Improved legislative and regulatory approaches to insurance for wildfire risk could also lead to more predictable results from wildfire claims.

Read the issue paper and learn more about wildfire risk under the “Public Policy” tab at actuary.org.

The American Academy of Actuaries is a 19,500-member professional association whose mission is to serve the public and the U.S. actuarial profession. For more than 50 years, the Academy has assisted public policymakers on all levels by providing leadership, objective expertise, and actuarial advice on risk and financial security issues. The Academy also sets qualification, practice, and professionalism standards for actuaries in the United States.