An Actuarial Perspective on the 2016 Social Security Trustees Report

Under current law when trust fund reserves are depleted tax income will be sufficient to provide about only three-quarters of the scheduled benefits. The Trustees Report quantifies benefit and tax changes that could restore actuarial balance. Such changes would require Congressional action. Failure to act would cause a delay in some benefit payouts which, if not corrected by subsequent Congressional action, would result in benefit reductions.
Overview of Financial Status
Short-Range Estimates, 2016–2025Short-range solvency and financial adequacy are measured separately for Old-Age and Survivors Insurance and Disability Insurance programs, as well as for the combined Old-Age and Survivors Insurance and Disability Insurance (OASDI) trust funds. These measures are based on the projected trust fund ratios. A trust fund ratio is the ratio of the trust fund assets at the beginning of the year to the benefits payable during the year. A program is considered solvent during any period if the trust fund ratios are positive for each year in the period. For a program to pass the test of short-range financial adequacy, a further requirement is that the trust fund ratios remain at or above 100 percent throughout the 10-year short-range period.1 The DI trust fund ratio is 21 percent at the beginning of 2016, and is expected to rise somewhat over the next few years and then decline to zero during 2023. The OASI trust fund ratio is expected to drop from 357 percent at the beginning of the projection period to 194 percent in the 10th year of the projection period. Social Security’s OASI finances (excluding disability) are somewhat worse than the projection made a year ago. The total change in the projected 10th-year trust fund ratio was a decline of 22 percentage points. Moving the Short-Range Estimate period one year forward accounted for much of the change. Other changes, with the impact on the 10th-year trust fund ratio in parentheses, include:
The changes in legislation and regulations were primarily those made by the 2015 Bipartisan Budget Act including reallocation of the payroll tax and closure of unintended loopholes.

Unless otherwise noted, all subsequent information in this issue brief is based on the combined OASDI trust funds.

Trust Fund Asset Reserves
Any excess of tax income over outgo is recorded as an asset reserve of the Social Security trust funds. These trust fund asset reserves are held in special U.S. Treasury securities that totaled $2.8 trillion at the end of 2015. Trust fund asset reserves are expected to increase to almost $2.9 trillion by the end of 2019 and then decline slightly by the end of the short-range estimate period. The bonds in the trust funds represent the government’s commitment to repay the borrowed funds whenever Social Security needs the money.

Income and Cost
Figure 1 below shows the excess of income (excluding interest) over cost (referred to as a positive cash flow) in the period from 1976 through 2009, and the anticipated excess of cost over income through 2025. The excess of income over cost prior to 2009 has led to the current $2.8 trillion in trust fund asset reserves. 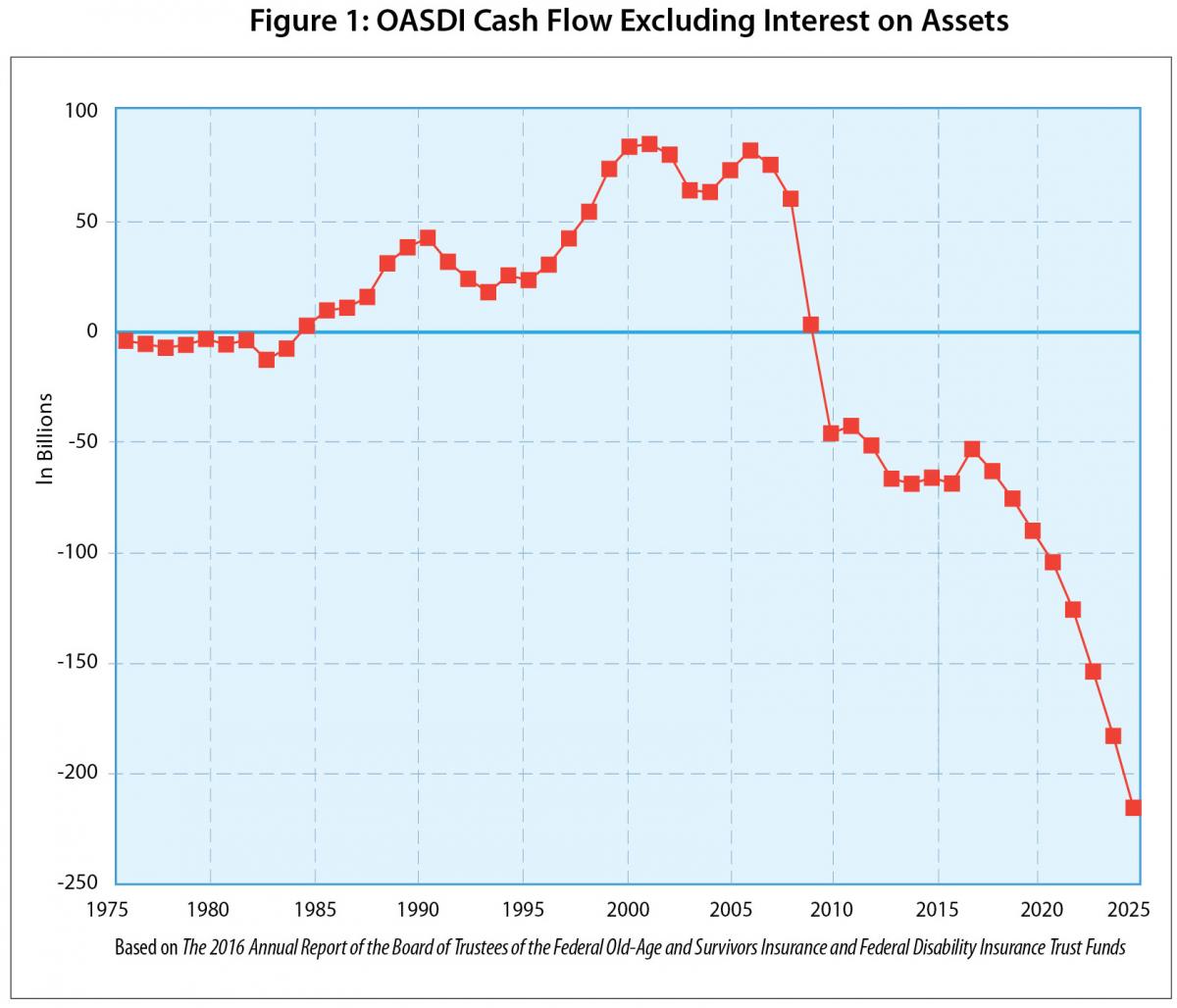 Long-Range Estimates, 2016–2090
Long-range estimates are based on a 75-year projection that covers the future lifetimes of nearly all current participants, which includes those paying payroll taxes and those already retired. The estimates show that, beginning in 2034, trust fund asset reserves are projected to be depleted and the system is expected to revert to a pay-as-you-go (PAYGO) system. This date is the same as shown in last year’s report. After reserves are depleted in 2034, Social Security income will be sufficient to pay 79 percent of scheduled benefits. This ratio decreases to 74 percent in 2090, as shown in Figure 2. 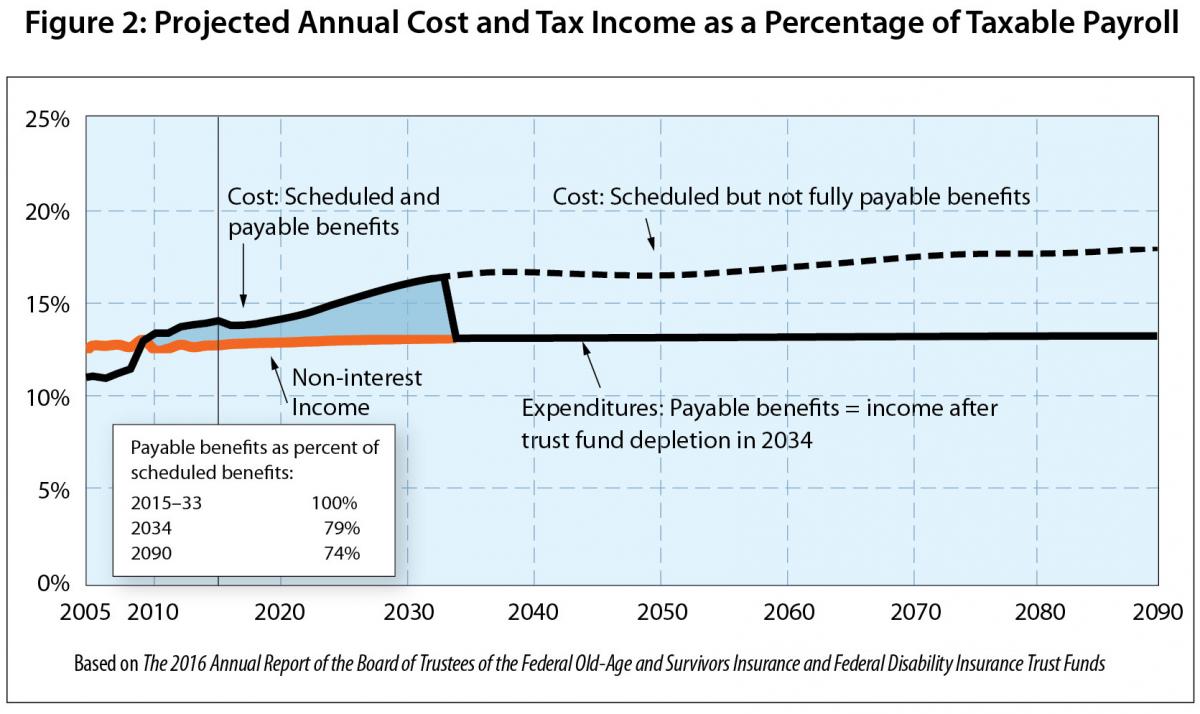 The projections show expenditures exceeding non-interest income in every year (as has been the case since 2010) and rising rapidly through 2035 as the baby boomers retire. While costs are expected to increase quickly, tax revenue is also expected to grow, but more slowly. After 2035, projected costs are fairly level as a share of both GDP and taxable payroll increasing somewhat later in the 75-year projection.

Actuarial balance conveys the long-range solvency of Social Security in one number. Actuarial balance is the present value of all income less all costs, divided by the present value of the taxable payroll over the 75-year period. It represents the annual amount (expressed as a percent of taxable payroll) by which income would need to increase to have trust fund assets equal to one year of scheduled benefits at the end of the 75-year projection period. The actuarial balance improved, from a negative 2.68 percent to a negative 2.66 percent from the 2015 to the 2016 Trustees Report. Refer to the appendix for a more expanded definition of actuarial balance.

The Statement of Actuarial Opinion addresses the inconsistency between trust fund accounting versus unified budget accounting that may be of interest to those who desire a deeper understanding of those important budget scoring conventions.

The sooner a solution is implemented to ensure the sustainable solvency of Social Security, the less disruptive the required solution will need to be.

The long-range expected increase in Social Security program costs relative to program income is principally caused by demographic trends. These demographic trends are very well-known and are generally referred to as “aging” or, sometimes, as “the aging of America.” It is useful to further separate the aging trend into two components:
A third demographic component, which acts to partially offset macro-aging, is net immigration. Because immigrants tend to be younger, higher immigration can offset some of the change in the age distribution of the population caused by lower birth rates.

An additional significant component of differences between low-cost, intermediate, and high-cost projections is the real-wage growth (specifically the difference between inflation and real-wages, or the real-wage differential). Actuarial balances at all durations as well as the projected depletion dates change materially based on changes to this component.

The ratio of covered workers to Social Security beneficiaries is expected to decrease significantly from 2.8 in 2015 to 2.2 in 2035, primarily due to macro-aging, and then to decrease more slowly, primarily due to micro-aging, to 2.0, by the end of the 75-year projection period. This decrease over the projection period of approximately 30 percent is important in a system in which the dollars paid in must equal the dollars paid out–a PAYGO system.

Figure 3 shows the projected growth in the number of Social Security beneficiaries relative to the covered working population, under the three sets of assumptions. Because the program financing is nearly PAYGO, the three alternative projections of long-range cost show similar patterns. 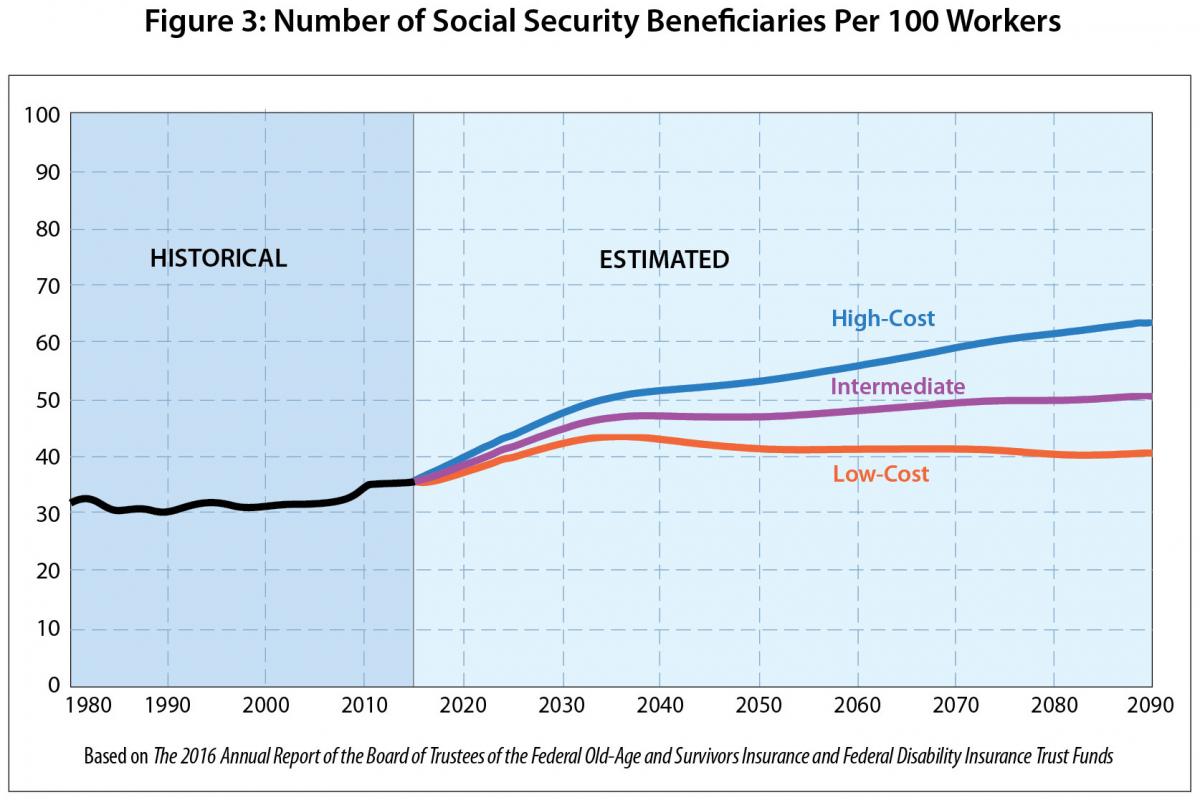 Low-cost, intermediate, and high-cost projections are labeled I, II, and III respectively.

Providing for solvency beyond the next 75 years will require changes to address micro-aging, as beneficiaries will likely be receiving benefits for ever-longer periods of retirement.

Regardless of the types of changes ultimately enacted into law, measures to address Social Security’s financial condition will best serve the public if implemented sooner rather than later. Some advantages of acting promptly are:

Providing for solvency of Social Security both during and after the period where the macro-aging trend impacts Social Security requires a timely and thoughtful solution. Not only should changes address the Baby Boom bulge, they should continue to address micro-aging trends and provide for solutions beyond the 2030s.

An immediate increase of 2.58 percentage points in the payroll tax (from 12.4 percent of payroll to 14.98 percent of payroll), a benefit reduction of about 16 percent, or some combination of the two, would pay all benefits during the period, but would not end the period with any trust fund reserve.

The high-cost 75-year projection in the Trustees Report shows a far greater actuarial deficit–6.30 percent of taxable payroll. The low-cost projection is much more favorable, with a small positive actuarial balance for the 75-year period.

Trust Fund Ratios
The trust fund ratio, equal to trust fund assets as a percentage of the following year’s cost, is an important measure of short-term solvency. A trust fund ratio of at least 100 percent indicates the ability to cover the expected scheduled benefits and expenses for the next year without any additional income. Figure 4 shows projected trust fund ratios under all three sets of assumptions. 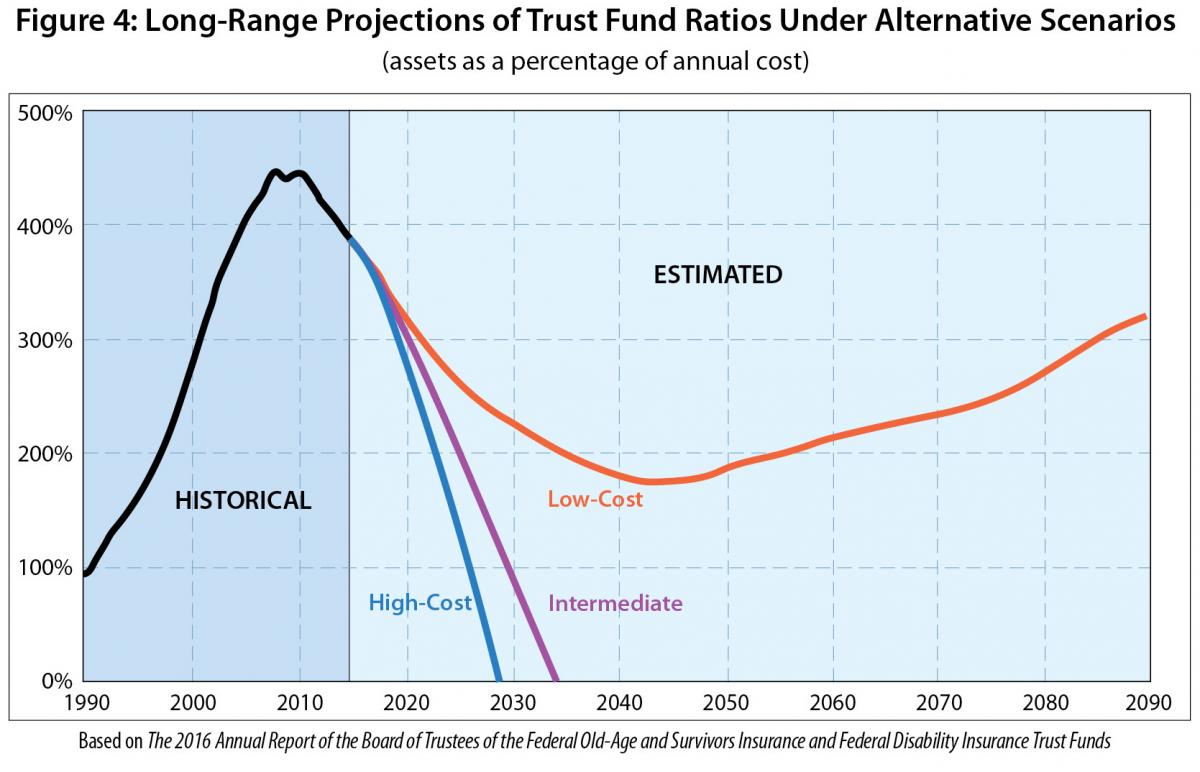 Low-cost, intermediate, and high-cost projections are labeled I, II, and III, respectively.

The results shown in the Actuarial Balance column may not be equal to the difference between Summarized Income Rate and Summarized Cost Rate because of rounding.

Sustainable solvency, in contrast, requires strict year-by-year solvency AND trust fund ratios that are level or trending upward toward the end of the period. For example, following the last major Social Security reform, the 1983 Trustees Report projected a positive actuarial balance under the intermediate assumptions, but the annual balances were negative and declining at the end of the 75-year period. That report was in actuarial balance but did not show sustainable solvency. As a result, the actuarial balance generally has been declining since then, primarily as a consequence of the passage of time. It is important to note that this result was exactly what the Trustees Report projected in 1983. More than 30 years later, it should be no surprise that large and growing actuarial deficits are now projected at the end of the long-range projection period. Adequate financing beyond 2090, or sustainable solvency, would require larger program changes than needed to achieve actuarial balance.

Unfunded Obligation
The unfunded obligation is another way of measuring Social Security’s long-term financial commitment. To compute it, discount with interest the year-by-year streams of future cost and income and then sum them to obtain their present values. Based on these present values, the general formula for computing the unfunded obligation is:

The unfunded obligation may be computed and presented in several ways. Perhaps the most useful way is based on taxes and benefits for an open group of participants over the next 75 years, including many people not yet born, the same as was calculated in the basic projections. That methodology is consistent with the primarily pay-as-you-go way the program is designed and currently run. Although the trustees provide alternative calculations based on the closed group of current participants, we believe the open-group basis makes more sense for Social Security and avoids certain misleading outcomes. For example, if the program were in exact actuarial balance, the open group measure of the unfunded obligation would be zero, while the closed group measure would show a substantial unfunded obligation.

In recent years, the Trustees’ Reports have also presented the unfunded obligation based on stretching the 75-year projection period into infinity. The infinite horizon projections project all annual balances beyond 75-years assuming that the current law, demographic assumptions, and economic trends from the 75-year projection continue indefinitely; in practice, this is highly problematic. Projections over an infinite time period have an extremely high degree of uncertainty. Troublesome inconsistencies can arise among demographic and program-specific assumptions. By assuming that longevity keeps increasing forever while retirement ages remain static, for example, the infinite time period forecast will eventually result in an extremely long period of retirement.

Because the future is unknown, the trustees use alternative projections and other methods to assess how the financial results may vary with changing economic and demographic experience. 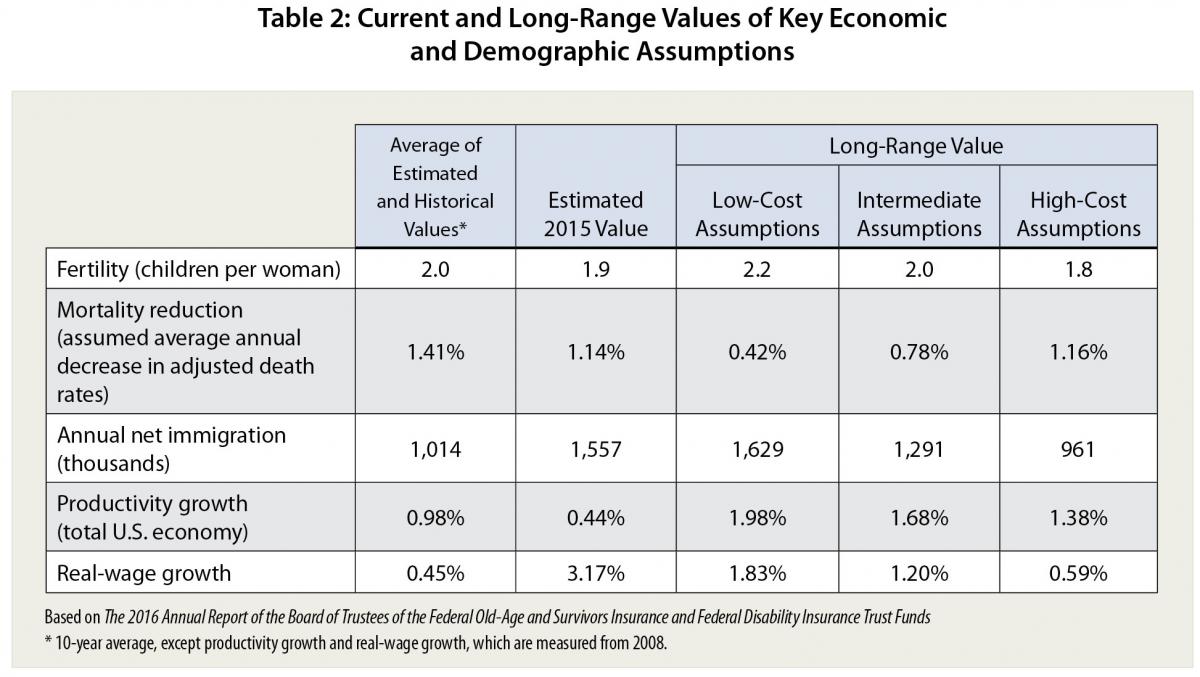 Sensitivity Analysis
The low-cost and high-cost projections change all the major intermediate assumptions at once in the same direction, either favorably or unfavorably. In contrast, there might be some interest in how the projections change when only one key assumption is changed at a time, either favorably or unfavorably. A sensitivity analysis shows exactly this. Just one assumption is changed at a time to determine the financial impact. Table 3 gives results of three sensitivity tests focusing on total fertility rate, mortality reduction, and real-wage growth.

If the real-wage growth assumption were changed from 1.21 percent to 1.83 percent, for example, the actuarial deficit would be reduced from 2.66 percent of taxable payroll to 1.64 percent, and the year of trust fund asset reserve depletion would be extended from 2034 to 2038. 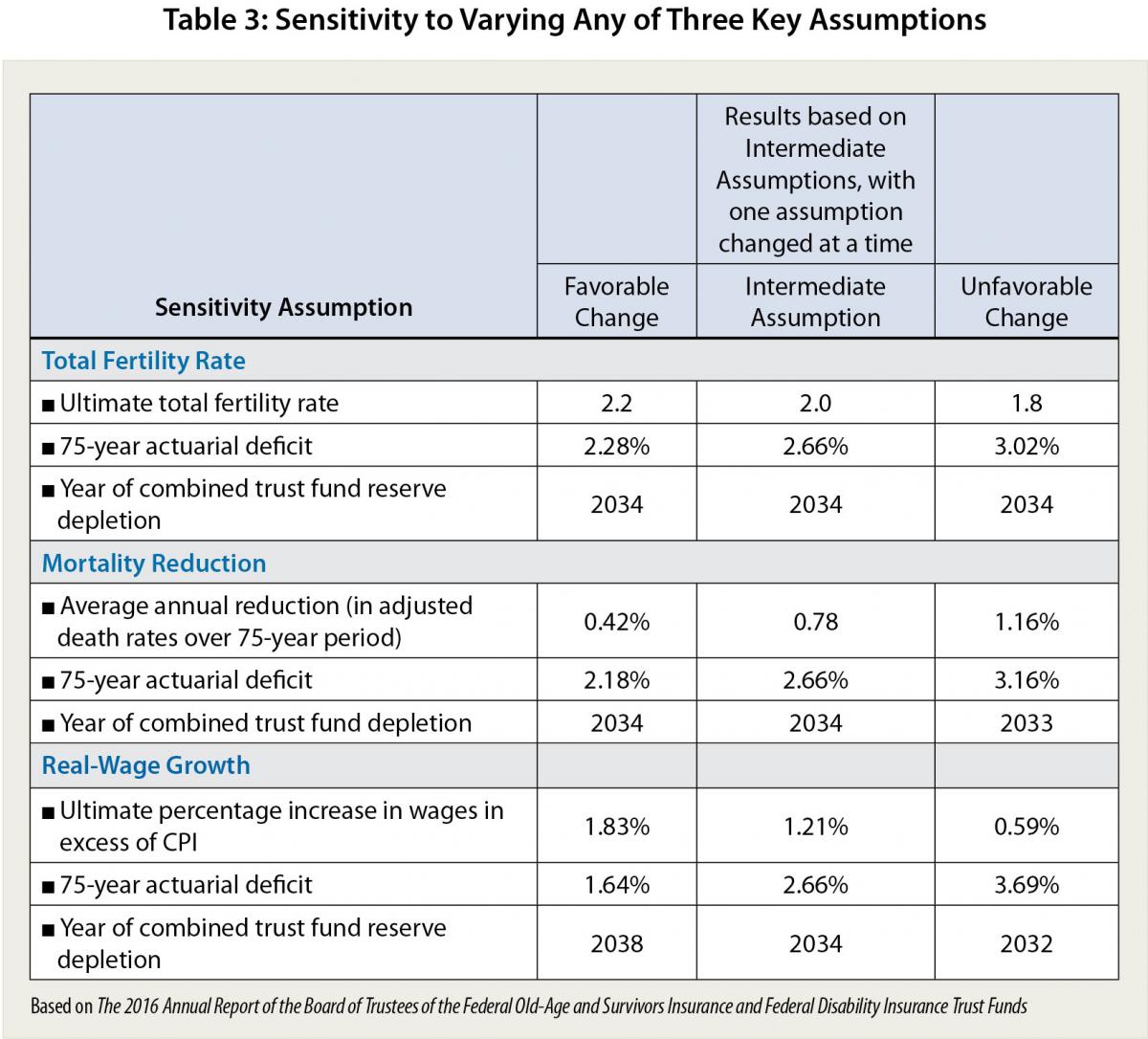