WASHINGTON—As part of its continuing public policy research program providing objective and independent information based on actuarial analysis, the American Academy of Actuaries today introduced the first model and results of the Actuaries Climate Risk Index (ACRI), which provides results associating dollar estimates of property losses in the United States with changes in extreme weather.

In the introduction to the research, Academy presidential leadership notes that the publication of the ACRI is not a political statement, but rather provides the Academy’s objective voice about matters related to risks from climate, an area that can only benefit from objective and independent actuarial analysis. 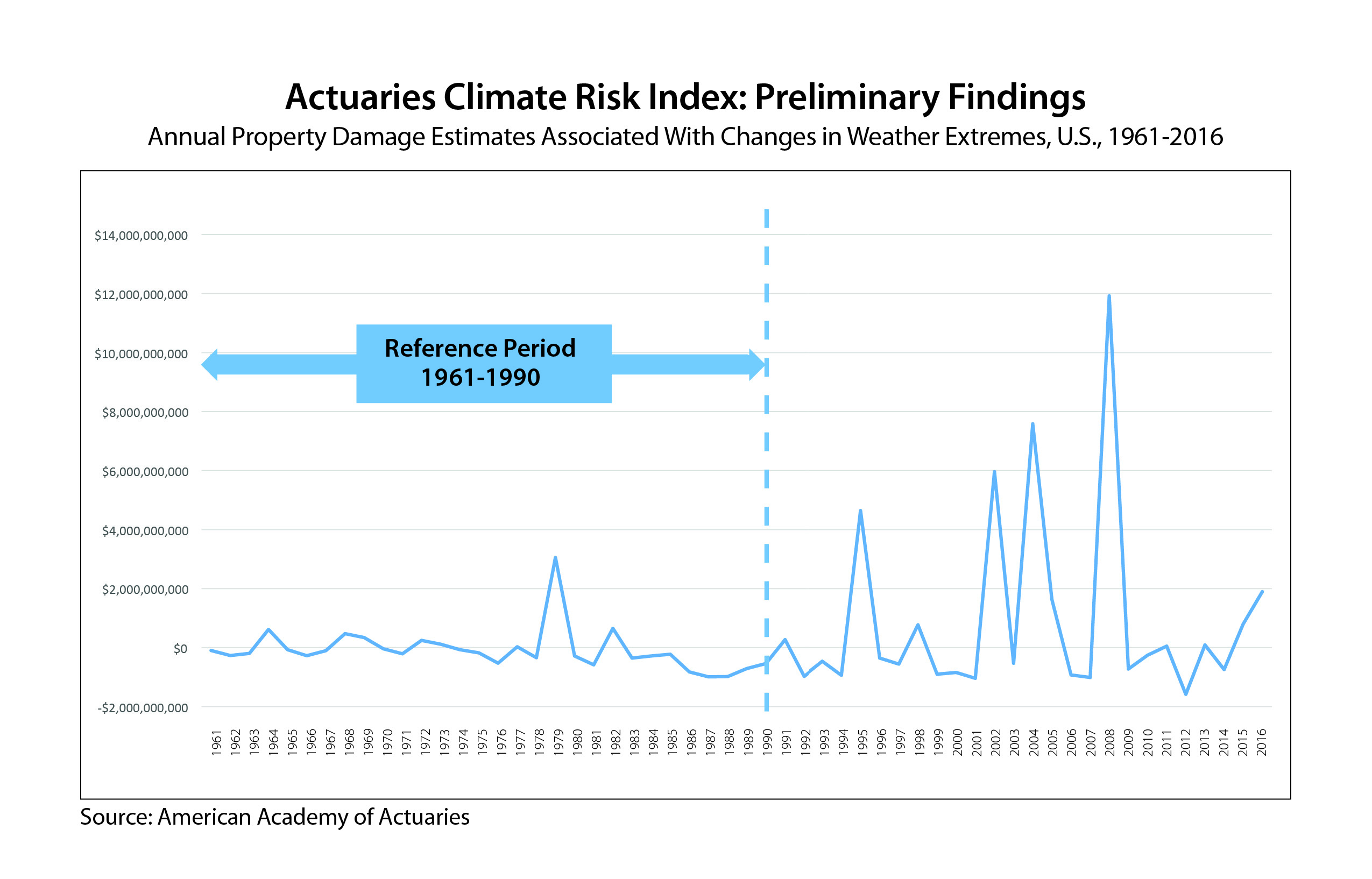 “The ACRI breaks new ground by connecting the dots between property losses and changing patterns of extreme weather, providing a new, more precise level of understanding of the effects of these changes to public policymakers, actuaries, insurers, disaster planners, and others,” said Academy Senior Casualty Fellow Rich Gibson. “This first model represents a step forward in quantifying the relationship between past extreme weather and property damage, and is the culmination of years of research into data provided by the Actuaries Climate Index (ACI) and into the appropriate application of generally accepted scientific practices to modeling this relationship.”

Preliminary ACRI results show an estimated additional $24 billion of property damage in the United States from the period 1991 to 2016 associated with changes in extreme weather in this period. The dollar amount is over and above what would have been expected for this period, relative to climate and climate risk data from the reference period of 1961–1990 and after adjustment for changes in property damage estimates that could be expected purely due to increases in population and development.

The ACRI’s information on changes in extreme weather conditions is drawn from the Actuaries Climate Index (actuariesclimateindex.org), which tracks and reports on changes in these conditions across the United States and Canada on a quarterly basis. The preliminary ACRI model, unlike the ACI, reports data only for the United States due to limitations in the data on Canadian losses captured in publicly available databases that matched the ACI’s geographic and time reference periods. These initial ACRI results, and a comprehensive description of the new ACRI model, are published in Actuaries Climate Risk Index: Preliminary Findings, available online at actuary.org. The paper acknowledges Steve Jackson, Ph.D., the Academy’s assistant director for research (public policy) and members of the Climate Index Working Group for their efforts to bring this project to fruition.

The American Academy of Actuaries is a 19,500-member professional association whose mission is to serve the public and the U.S. actuarial profession. For more than 50 years, the Academy has assisted public policymakers on all levels by providing leadership, objective expertise, and actuarial advice on risk and financial security issues. The Academy also sets qualification, practice, and professionalism standards for actuaries in the United States.