Panelists provided insights into cyber risk insurance issues—including the exposure to financial and reputational harm resulting from cyberattacks specifically and cybercrime generally—which has become increasingly prevalent and persistent in recent years as to be commonplace. 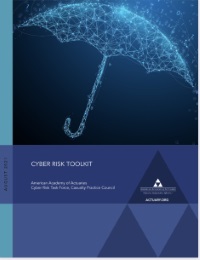 In conjunction with the webinar, the CRTF released a series of papers combined together as a Cyber Risk Toolkit—resources for the general public, public policymakers, actuaries, the insurance sector, and other stakeholders. The toolkit is composed of an Introduction to Cyber, Cyber Threat Landscape, Silent Cyber, Cyber Data, Cyber Risk Accumulation, Cyber Risk Reinsurance Issues, and Ransomware. It also includes common cyber-related policy language definitions.

This introductory paper examines some of the key aspects of cyber risk coverage such as general insurance product market. It also discusses some of the more well-known cyberattacks and looks at the cyber threat landscape. Other upcoming CRTF papers will be added to the Toolkit as they become available.

The Academy’s Annual Meeting and Public Policy Forum, to be held as a hybrid event Nov. 4–5 at the Fairmont Hotel in Washington, D.C., will include several plenary sessions with property/casualty (P/C) content. P/C breakout sessions will include:

Affordability in Auto Insurance (Nov. 4)—A panel discussion on factors that affect affordability of auto insurance as well as the Federal Insurance Office in U.S. Department of the Treasury’s recent request for information to update its 2017 Affordability Study and what that might mean for automobile insurers and policy holders going forward.

Wildfire Risk: Still a Hot Topic (Nov. 4)—A panel discussion on the current effects of recent wildfire seasons, some of the most costly and destructive on record, on the insurance industry and public policy arena, and what it could mean in the future.

Impact of Telehealth on Workers’ Compensation (Nov. 5)—A panel discussion on what the increased focus on telehealth means from the perspective of injured workers, their employers, and insurers.

Plenary sessions will cover cross-practice critical issues including COVID-19; diversity, equity & inclusion; insurance regulation at the state, federal, and international levels; and professionalism and ethical concerns relating to data analytics and artificial intelligence applications. All of these sessions will offer the opportunity to have a discussion directly with policymakers, subject-matter experts, and Academy leaders.

Featured speakers will include Robert Costa, co-author with Bob Woodward of the No. 1 bestseller Peril, who will speak at the opening plenary session for in-person attendees only; and Cathy O’Neil—author of the bestselling book Weapons of Math Destruction: How Big Data Increases Inequality and Threatens Democracy—who will keynote the professionalism plenary session that will be accessible to both in-person and virtually connected attendees.

The Academy is committed to following local health guidelines. Learn more about the Fairmont Hotel’s commitment to health and safety here. Join your peers and connect with Academy members and leadership by attending the Academy’s premier annual event. Register today.

GibsonA recent episode of the Actuary Voices podcast features an interview with Rich Gibson, the Academy’s senior casualty fellow. Gibson traces his career as an actuary, which began in a high school math class and progressed to Miami University in Ohio, and then to becoming a P/C actuary. Working at the Academy, Gibson has been “dealing with different issues,” including cyber risk, business interruption insurance, and wildfires. “I like being part of that,” he said.

Listen to the podcast or download it to your favorite device.

Lauren Cavanaugh, vice president, casualty, and Laura Hanson, vice president, life, co-presented verbal comments to the NAIC’s Special (EX) Committee on Race and Insurance regarding then-proposed charges being considered by the committee. Their remarks addressed concerns with the special committee’s property/casualty and life workstreams previously provided in a comment letter submitted by Academy President Tom Campbell in May.

Academy volunteers gave presentations to the National Association of Insurance Commissioners (NAIC) as part of its 2021 Summer Meeting in virtual meetings leading up to its in-person meeting in Columbus, Ohio, in August.

COPLFR sent an updated version of its comment letter to the NAIC Blanks Working Group on proposed changes to P/C annual statements.

The Automobile Insurance Committee sent comments to the U.S. Department of the Treasury’s Federal Insurance Office (FIO) on its request for information regarding FIO’s future work relating to monitoring the availability and affordability of automobile insurance. 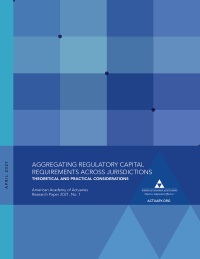 The annual CLRS, which was held Sept. 13–15, is sponsored jointly by the Academy and the Casualty Actuarial Society (CAS).

The release of the winter 2020–21 data of the Actuaries Climate Index (ACI), which provides objective measures of specific and aggregate changes in climate extremes and sea level across Canada and the United States, shows a second consecutive small decline in the ACI’s five-year moving average which now sits at 1.19 points above the index’s reference period.

“The decline does not change the overall results that the ACI’s measures of climate extremes have been consistently occurring at well above the rate seen from 1961 to 1990,” said Doug Collins, chair of the Climate Index Working Group. One factor behind the small decline in the five-year average was the new seasonal value reflected in this data release for the winter 2020–21 period, which was relatively low compared to seasonal values in recent years, Collins said.

The ACI is sponsored jointly by the Academy, the Canadian Institute of Actuaries, the CAS, and the Society of Actuaries.

The ACI is used as a research basis for a working paper published by the Federal Reserve Bank of Richmond, Extreme Weather and the Macroeconomy, as part of its Working Paper Series.

The deadline for an early registration discount for in-person participation in the 2021 Seminar on Effective P/C Loss Reserve Opinions, to be held Dec. 6–7 at the Chicago O’Hare Airport, has been extended to Nov. 15.

This annual event, offered in a hybrid format this year, is designed for property/casualty actuaries who prepare or assist with preparing NAIC annual statements of actuarial opinion on P/C loss reserves.

The in-person event, conveniently located at the Hilton Chicago O’Hare Airport hotel, will offer onsite attendees exclusive access to a question-and-answer session at the end of each day with faculty as well as a networking reception. Make plans to join the experienced appointed actuaries on the faculty in December—register today.

Following is a roundup of recent P/C-related legislative and regulatory activity.

Congress passed, and President Biden signed into law, H.R. 5305, a stopgap spending measure for federal government funding ahead of a Sept. 30 deadline. It keeps federal agencies funded at current levels through Dec. 3 and included reauthorization of the National Flood Insurance Program (NFIP) which would have expired. Deliberations on government funding beyond Dec. 3 are ongoing, and it remains to be seen what federal spending levels will be or which programs will be included in this or other FY 2022 government funding legislation.

Wisconsin Gov. Tony Evers signed Senate Bill 160 into law, which imposes requirements relating to the protection of non-public information on insurers and other persons regulated by the Office of the Commissioner of Insurance (licensees). Under the law, a licensee must conduct a risk assessment and develop an information security program based on the assessment. The risk assessment must identify and assess reasonably foreseeable threats that could result in unauthorized access to or transmission, disclosure, misuse, alteration, or destruction of non-public information.

Then-New York Gov. Andrew Cuomo signed S 5760 into law, authorizing catastrophic business disruption insurance as a non-basic type of insurance. The law defines “Excess Business Disability Insurance” as insurance against financial loss experienced by a corporate entity or a partnership where an individual integral to that organization becomes disabled due to sickness, or bodily injury. Such coverage can include reimbursement for all overhead costs and expenses and all capital outlays of an organization and buy/sell arrangements in an amount sufficient to purchase the disabled individual’s interest share in the organization.

Delaware Gov. John Carney signed House Bill 43 amending the state code relating to the licensing of insurance professionals. The law extends the limited licensing exemption for adjusters to appraisers, who are dispatched by insurers to the state after catastrophic events, such as hurricanes or tornadoes, to appraisers. The change will allow for the prompt appraisal and settlement of motor vehicle claims arising from such catastrophic events.

Pennsylvania Gov. Tom Wolf signed Senate Bill 425. The law amends the Medical Care Availability and Reduction of Error Act pertaining to medical professional liability to further provide for informed consent requirements. The law permits a physician to fulfill their duty to obtain a patient’s consent (or that of their authorized representative) by a qualified practitioner prior to conducting surgery, administering radiation/chemotherapy, or medications and devices.

Oregon Gov. Kate Brown signed House Bill 2393. For uninsured motorist coverage, the law removes the option to elect coverage limits that fall below those applicable to personal injury protection benefits. The law also requires “transportation network companies” and “taxi companies” that offer and can be accessed by means of software applications and internet-based electronic technology, respectively, to provide motor vehicle liability insurance policy with personal injury protection benefits to each driver who operates their own personal vehicle when providing transportation services as a hired driver.

Maine Gov. Janet Mills signed LD 1420 (SP 470) to conform state law to the Peer-to-Peer Car Sharing Program Model Act adopted by the National Council of Insurance Legislators. The law establishes numerous insurance requirements for peer-to-peer car sharing. Among these are a stipulation that peer-to-peer car sharing programs will assume the liability of a shared vehicle owner for bodily injury or property damage to third parties, uninsured and underinsured individuals, or personal injury protection losses during the car-sharing period in an amount stated in the car sharing program agreement. Peer-to-peer car-sharing programs are required to ensure that shared vehicle owners and shared vehicle operators are insured to at least minimums stipulated by Maine statute.

Illinois Gov. Pritzker also signed peer-to-peer car-sharing legislation (House Bill 3712), the Car-Sharing Program Act. The law establishes provisions governing car-sharing programs and insurance coverage requirements for these programs. The law provides that, under specified circumstances, a motor vehicle insurer that defends a claim against a shared vehicle that is excluded under the terms of its policy will have the right to seek recovery (instead of contribution) against the motor vehicle insurer of the car-sharing program. The shared-vehicle owner and the shared-vehicle driver are insured under a motor vehicle liability insurance policy that provides insurance coverage two times the minimum amount set forth in the Illinois Vehicle Code.