Casualty Quarterly did a Q&A with committee Chairperson Jeri Xu on the new paper and insurance-linked securities (ILS).

Can you describe insurance ILS and catastrophe bonds for those who may not be familiar? 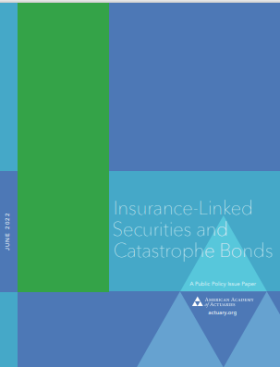 ILS are an alternative source of capital from the financial market to protect insurers against large losses, and at the same time, an asset class that offers a source of diversification for investors because insurance-related losses like natural catastrophes have low correlation with traditional asset classes. ILS are complementary to traditional reinsurance, though not a pure substitute as there are differences in coverage and accessibility between the two products. ILS cedants include not only insurers, but also reinsurers, publicly owned service providers, and governments. Investors are generally institutional investors, like pension funds, hedge funds, and dedicated ILS funds. The broader alternative capital market includes many types of products, for example, sidecars, industry loss warranties, collateralized reinsurance, and ILS—of which cat bonds are the predominant type.

How has the ILS market evolved in the past decade?

Over the past 10 years, the volume of ILS issued has grown substantially. The market is constantly evolving in terms of product innovation and the range of cedants/sponsors and investors who participate. While the typical cedant is an insurer or reinsurer, we have also seen utility companies and public entities seek out ILS capital. Over the years, the pool of investors has also become broader and more familiar with evaluating insurance risk.

How do cat bonds factor into catastrophe reinsurance costs?

Because cat bonds have grown in popularity, they can have significant influence on the pricing, terms, and conditions in the reinsurance industry. Generally, inflow of investor capital puts pressure on reinsurance pricing, as we saw during the soft market in the latter half of the 2010s. Cat bonds have generally performed well over the years, in terms of not being triggered to pay out losses, which contributed to the pricing inelasticity. Cat bonds did not react as strongly compared to traditional reinsurance after the 2017 hurricanes. However, they would respond more to financial market trends—for example, the financial crisis of 2007–2008 had a significant impact on cat bond issuance. In 2022, high inflation is driving up demand for more capital from both traditional reinsurance and ILS, and as a result, the cost of catastrophe reinsurance as well.

How risky are cat bonds as an investment? Who are the typical investors of an ILS instrument?

For an investor, the primary risk of a cat bond is whether a covered natural catastrophe will trigger the bond to pay out losses to the cedant or bond issuer. This probability of “default” depends on how the cat bond is structured—for example, what perils are covered and what is the coverage limit and deductible (or attachment). An investor may estimate the probability of tail events that would trigger the bond with the aid of catastrophe models. Usually, the trigger probability can range from 0.5% to 5%. Typical investors are institutional investors, pension funds, insurers, and reinsurers. Today, dedicated funds who specialize in ILS investments are the largest investor group.

How large is the ILS market? Is there any concern about systemic risk from a large covered event?

The total alternative capital market stands at nearly $100 billion, which is about 15% of the global reinsurance capital. The remainder is from traditional reinsurance. Generally, the ILS market can absorb losses from extreme catastrophes. However, climate change and inflation are challenges that will continue to impact investors’ decisions on how to deploy their capital and the commensurate return required. With the frequency of secondary perils (severe storms, wildfires, and floods) on the rise, this can limit the availability of all-perils covers at lower attachments.

How do you expect climate change to effect ILS over the next 10 or 20 years?

The ILS market is paying more attention to the impacts of climate on the frequency and severity of natural catastrophes. Perils such as floods and wildfires have become much more prevalent in recent years. As a result, the view of catastrophe risk will evolve. In the longer term, there could be increased demand for protection from the insurance and ILS markets.

Are you ready to envision tomorrow with us? The Academy’s Envision Tomorrow: 2022 Annual Meeting will be Nov. 2–3 at the Metro Center Marriott in Washington, D.C. Attendees will have the opportunity to engage directly with national policymakers and thought leaders on today’s top issues while enjoying the many wonderful destinations and attractions in the nation’s capital. Look for agenda details to be unveiled soon, including breakout sessions exploring top property/casualty issues. Learn more. 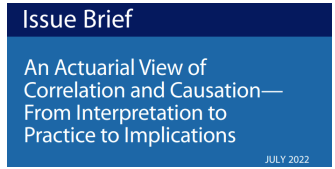 The Academy’s Data Science and Analytics Committee (DSAC) and the P/C Racial Equity Task Force (RETF) released a major issue brief, An Actuarial View of Correlation and Causation—From Interpretation to Practice to Implications in early July.

The issue brief discusses key questions actuaries may encounter in the risk-classification domain, and actuarial practices surrounding data, predictive modeling, and risk classification that are also key considerations for public policymaking and regulatory efforts aimed at ensuring that insurance practices are not “unfairly discriminatory.”

“Ensuring that the analysis of risk in the insurance context does not contribute to unfair discrimination is a priority of the Academy,” said DSAC Chairperson Dorothy Andrews. “Academy volunteers across actuarial practice areas are performing a high level of work and regularly engaging with regulators and legislators on issues of bias and the concept of unfair discrimination in insurance, and this new issue brief is a significant contribution to that effort.”

Webinar Set for July 12—The Academy is hosting a webinar, “Correlation Versus Causation: Clarifying the Differences & Implications,” to look at topics discussed in the issue brief. Andrews will moderate and DSAC and RETF members will present. The webinar is Tuesday, July 12, from noon to 1:30 p.m. EDT. Register today. 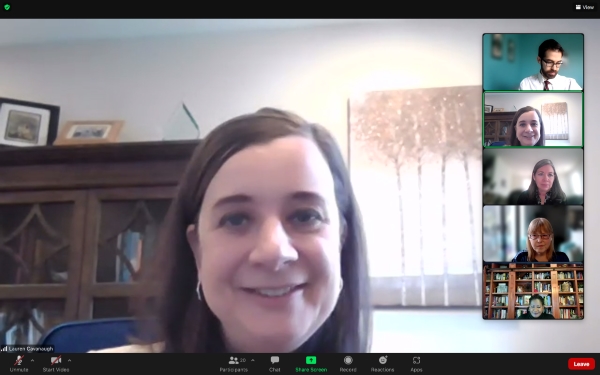 CPC and RMFRC volunteers and Academy staff participated in about a dozen meetings with representatives from congressional committees, and federal and congressional agencies including the Congressional Research Service, the Cybersecurity and Infrastructure Security Agency (CISA), the White House Domestic Climate Office, and the U.S. Government Accountability Office.

SlotznickLisa Slotznick, a past Academy casualty vice president, was nominated to be the Academy’s next president-elect. Slotznick, currently vice chairperson of the Committee on Qualifications, also serves as chairperson of the Climate Change Joint Task Force. She is slated to become president-elect at the Academy’s “Envision Tomorrow: 2022 Annual Meeting,” set for Nov. 2–3 in Washington, D.C.

“I am thrilled and honored to be nominated to serve as president-elect of the Academy,” Slotznick said. “Serving as a volunteer for both public policy and professionalism issues has focused my efforts on the Academy’s mission to serve the public and the U.S. actuarial profession.”

In addition to being a past casualty vice president, Slotznick was a member and chairperson of the Committee on Property and Liability Financial Reporting, chairperson of the Model Audit Rule Practice Note Subgroup, and has served on many Academy committees and work groups, including the P/C Extreme Events and Property Lines Committee. She was also a recipient of an Outstanding Volunteerism Award in 2015 and was featured in an “Actuary Voices” podcast earlier this year. 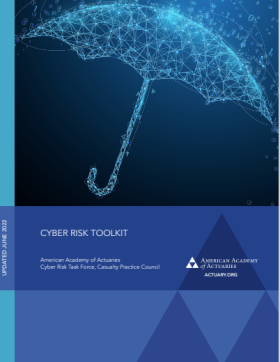 The Cyber Risk Task Force (CRTF) updated its Cyber Risk Toolkit to include the section “Autonomous Vehicles and Cyber Risk.” The toolkit, released originally last year, was previously updated in February. With the line between cyber and auto insurance blurring as sophisticated and often internet-connected autonomous vehicles (AVs) become more prevalent, this new section discusses the growth of AVs, their benefits, and their cyber risks, in addition to legislation and current regulations overseeing cyber insurance.

The CRTF sent comments to the U.S. Treasury Department’s Federal Insurance Office on the effectiveness of cyber-related considerations of the Terrorism Risk Insurance Program.

The CCTF also submitted comments to the Securities and Exchange Commission (SEC) on the SEC’s request for public input on the proposed rule, the “Enhancement and Standardization of Climate-Related Disclosures for Investors.”

The “Wildfire Lessons Learned and State of Wildfire Risk Modeling” webinar held in mid-March looked at the state of wildfires in the past few years in several areas of the country, following on the P/C Extreme Events and Property Lines Committee’s recently published Wildfire: An Issue Paper—Lessons Learned from the 2017 to 2021 Events.

Slides and audio are available free for logged-in Academy members.

President Biden signed HR 2471, The Consolidated Appropriations Act of 2022, which included the 18th consecutive extension of the National Flood Insurance Program (NFIP) through Sept. 30. The measure also allotted $1.5 billion to help combat climate change, with nearly half of the funding going to clean energy programs and biodiversity conservation efforts.

New York Gov. Kathy Hochul and Washington Gov. Jay Inslee signed bills (SB 7838 and HB 1389, respectively) into law, establishing requirements for peer-to-peer car-sharing insurance. The laws outline how cars used in peer-to-peer sharing are insured and how liability is determined in case of an accident or damaged property.

West Virginia Gov. Jim Justice signed HB 4295 into law, extending the state’s Office of the NFIP, and transferred the NFIP from the insurance commissioner to the Division of Emergency Management. Justice also signed HB 4296, aimed at modernizing and updating current workers’ compensation statutes to require the acceptance of electronic invoices and transfers.

Idaho Gov. Brad Little signed HB 590 into law to streamline the workers’ compensation settlement process for employers and injured workers who choose to settle claims without going to trial.

Indiana Gov. Eric Holcomb signed into law HB 1153, which establishes timelines for injured individuals to file workers’ compensation claims within two years of the incident—after two years the injured can apply for an adjustment claim.

Mississippi Gov. Tate Reeves signed SB 2095 pertaining to medical cannabis, defining what a medical cannabis establishment is, establishing that government medical assistance programs or private insurers are not required to reimburse individuals who utilize cannabis for medical reasons, and outlining disciplinary actions of medical cannabis use while working.

Insurance Business Magazine cited the Academy’s Cyber Risk Toolkit, which has been updated to include the “War, Cyberterrorism, and Cyber Insurance” section and a “Cyber Risk Resource Guide.”

An article in Sustainability is the first to appear in a peer-reviewed journal focusing on the Actuaries Climate Index, which is jointly sponsored by the Academy with other North American actuarial associations. The academic researchers assessed the index and concluded it is predictive both of crop yields and of the severity of shortfalls in crop yields.

Portail de L’Assurance (Canada; subscriber-only) reported on the latest data release of the Actuaries Climate Index, jointly sponsored by the Academy and other actuarial organizations, which provides a quarterly gauge of changes in extreme weather events and sea levels.