Date
November 30, 2016
PDF
ACI News Release.pdf
Washington, D.C.; Arlington, VA; Schaumburg, IL; and Ottawa, ON (Nov. 30, 2016) – Today, organizations representing the actuarial profession in the United States and Canada launched the Actuaries Climate IndexTM (ACI), which provides a quarterly measure of changes in extreme weather events and sea levels, available online at www.ActuariesClimateIndex.org. This index is based on analysis of quarterly seasonal data for six different index components collected from 1961 to winter 2016, compared to the thirty-year reference period of 1961 to 1990. The Actuaries Climate IndexTM is an educational tool designed to help inform actuaries, public policymakers, and the general public about climate trends and their potential impact.

The Actuaries Climate IndexTM looks at the continental United States and Canada, placed into 12 regions. Higher index values indicate an increase in the occurrence of extreme weather events. The latest Actuaries Climate IndexTM values show an increase in the impact of extreme weather events, such as high temperature, heavy precipitation and drought.

The risk measured by the Actuaries Climate IndexTM is relative to the average frequencies during the reference period of 1961 -1990. The data is from neutral, scientific sources, generating objective, evidence-based results on extreme weather events. According to the data analysis, 1.02 is the current five-year moving average value for the Actuaries Climate IndexTM. The index value remained below 0.25 during the reference period, reached a value of 0.5 in 1998, and first reached 1.0 in 2013.These values indicate a sustained increase in the frequency of extreme weather occurrences and changes in sea levels.

“The Actuaries Climate Index is designed to provide objective data about changes in the frequency of extreme climate events over recent decades in the continental United States and Canada,” said Doug Collins, Chair of the Climate Change Committee. “Actuaries are experienced in the assessment and mitigation of the financial consequences of risk, and we have developed the index for analyzing the climate.” 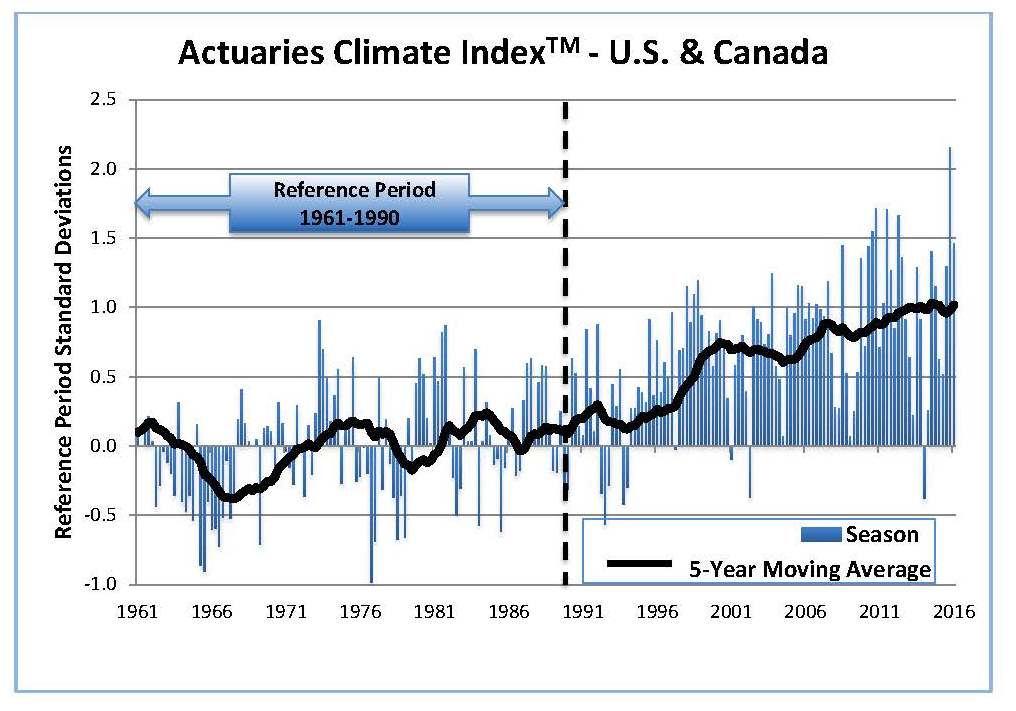 About the Sponsoring Organizations
The American Academy of Actuaries is an 18,500+ member professional association whose mission is to serve the public and the U.S. actuarial profession. For more than 50 years, the Academy has been the national association for actuaries in the United States and has assisted public policymakers on all levels by providing leadership, objective expertise, and actuarial advice on risk and financial security issues. The Academy also sets qualification, practice, and professionalism standards for actuaries in the United States.

The Casualty Actuarial Society (CAS) is a leading international organization for credentialing and professional education. Founded in 1914, the CAS is the world’s only actuarial organization focused exclusively on property and casualty risks and serves over 7,000 members worldwide. Professionals educated by the CAS empower business and government to make well-informed strategic, financial, and operational decisions.

With roots dating back to 1889, the Society of Actuaries (SOA) is the world’s largest actuarial professional organization with more than 27,000 actuaries as members. Through research and education, the SOA’s mission is to advance actuarial knowledge and to enhance the ability of actuaries to provide expert advice and relevant solutions for financial, business, and societal challenges. The SOA’s vision is for actuaries to be the leading professionals in the measurement and management of risk.
###
Share