Numerous studies have examined the incidence of potential surprise bills,2 their causes, and state-level efforts to address them. Findings include: 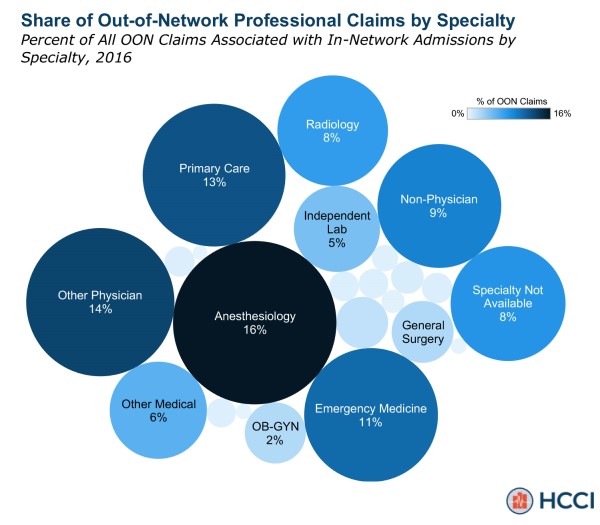 Consumers face two negative consequences when their medical providers charge especially high rates. First, when such providers are out-of-network, consumers face high out-of-pocket costs. Second, even if these providers contract to be part of a network, if the contracted rates are high, they will translate to higher premiums.

FIGURE 5: Distribution of States by Share of In-Network Hospital Visits With Out-of-Network Charges, 2017

Goals of proposals to address surprise-billing problems include reducing out-of-pocket costs and eliminating balance billing for surprise bills and addressing the market failure that has led to such bills. At the same time, proposals aim to retain patient access to needed medical care while also avoiding or limiting any related increases in health insurance premiums.

Most current proposals would base patient out-of-pocket costs on in-network cost-sharing requirements and would prohibit balance billing by providers. This approach would eliminate the surprise billing problem for patients inadvertently receiving out-of-network care. However, it would be only part of any solution to surprise billing. Proposals also need to determine what providers would be paid by insurers. If insurers simply pay out-of-network providers their full charge less any patient cost-sharing, then premiums would increase to reflect the higher out-of-network charges. In addition, paying full out-of-network charges would increase the incentives for providers to be out of network, exacerbating the market failure that helped lead to the surprise billing problem in the first place. On the other hand, if balance billing is banned and there is no payment standard, then providers would have to accept whatever insurers decide to pay, which could lower premiums.

Two primary approaches for paying providers have emerged. One would base insurer payments to applicable out-of-network providers on a benchmark rate, such as the median in-network provider rate. The other would create an independent dispute resolution process, also known as arbitration.

Under this approach, insurer payments to applicable out-of-network providers would be based on a benchmark rate, such as the median in-network provider rate or some multiple of Medicare rates. The benchmark would vary by the particular health procedure code and applicable modifiers. In addition, an area-specific benchmark would automatically incorporate any urban-rural or other area-related provider rate differences.

The Congressional Budget Office (CBO) estimates that using the median in-network rate as the payment benchmark would lower insurance premiums, primarily because in-network rates would move toward the median rate, which is lower than the average payment rate.14 In other words, insurers could use the median rate as leverage when contracting with in-network providers that are currently above the median. Using a median in-network payment benchmark could help address the market failure related to the difficulty insurers and large group plans have when negotiating with ancillary providers. Current medical loss ratio (MLR) requirements would help ensure that insurers pass along to consumers any cost savings resulting from lower provider rates in the form of lower premiums.

The higher the benchmark rate, the lower the premium savings; premiums could even increase if the benchmark rate exceeds the current average payment rate. Setting a benchmark based on provider charges could be particularly prone to increasing provider payments and increasing the incentives for providers to be out-of-network. In addition, if patient out-of-pocket costs are based on the benchmark (e.g., through coinsurance requirements), higher benchmarks would result in higher out-of-pocket costs, relative to lower benchmarks. Linking coinsurance to an in-network payment rate regardless of whether a higher benchmark is used would avoid this situation.

Under this approach, a dispute resolution process would be used to determine payment for out-of-network providers either instead of a payment benchmark or in addition to using a payment benchmark (i.e., a hybrid approach). For instance, with a “baseball-style” arbitration approach, insurers and providers would each submit a payment offer and a neutral arbiter would choose between those offers. Arbitration could be used at the request of the patient, insurer, or provider, or could be triggered automatically for out-of-network bills exceeding a threshold amount. Under a hybrid approach, a benchmark payment rate would be used as the default, but arbitration would be triggered, either upon request or automatically, for claims exceeding a threshold amount.

An arbitration process could put downward pressure on provider payment rates (and premiums) to the extent that providers lower their charges to avoid arbitration and arbiter decisions favor rates lower than average payment rates. However, the arbitration process risks putting upward pressure on provider charges, which could increase both premiums and out-of-pocket costs. For instance, providers could increase their charges to put them in a better bargaining position during arbitration. In addition, arbitration would not address the market failure that contributes to surprise bills.

If arbitration were used, the process would need to be structured carefully to avoid unintended consequences. Such guardrails could include:

Surprise bills occur when patients inadvertently receive care from an out-of-network provider. These bills can occur more frequently in situations when patients have little or no choice over a physician, such as in an emergency room or for ancillary services associated with an inpatient admission. Physicians can charge more for these services because they don’t need to negotiate lower rates or join a network to guarantee patient volume. Although many states have implemented comprehensive laws to address surprise bills, most haven’t. And even those that have such laws leave individuals covered by self-funded employer plans unprotected, because those plans are exempt from state law.

Federal action could result in more comprehensive protections for consumers. Most proposals would base out-of-pocket costs for surprise bills on in-network cost-sharing requirements. Proposals differ, however, regarding what insurers would pay out-of-network providers. One approach would base insurer payments on a benchmark rate, such as the median in-network provider rate or a multiple of Medicare rates. If set below the average in-network rate, a benchmark rate could lead to lower provider payments and premiums, and could provide increased incentives for out-of-network providers to join a network. A benchmark rate could help mitigate the market failure that results in emergency room and ancillary physicians opting to stay out-of-network with charges much higher than other specialties.