“Actuaries, individually and through the Academy, need to speak in relevant,
understandable ways.” 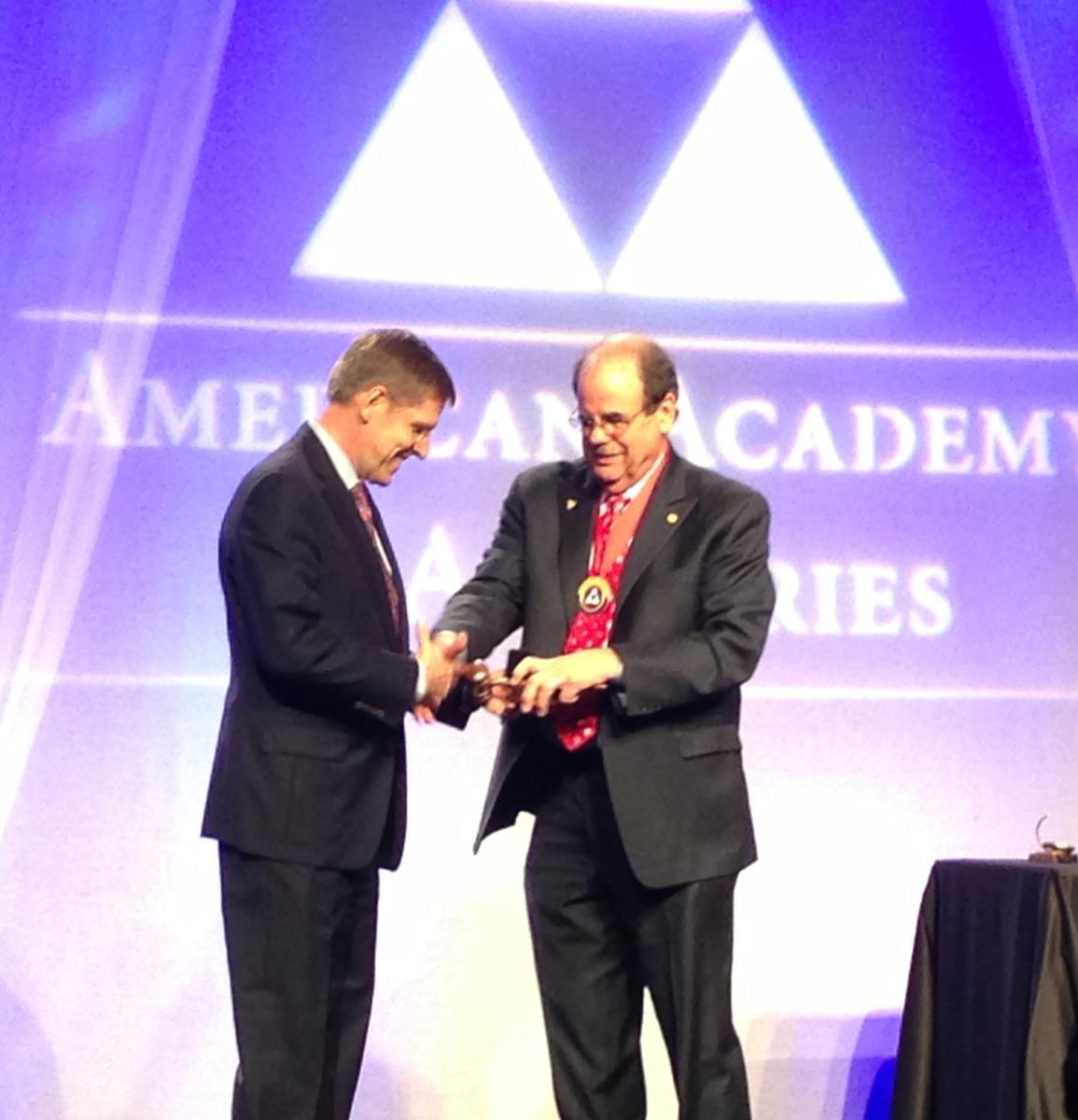 Good afternoon, members of the Academy and the Casualty Actuarial Society. I am honored and humbled to stand before you today as the 49th president of the American Academy of Actuaries.

As many of you know, I’ve been a long-time volunteer with the Academy. I’ve served in various committee and practice council leadership roles. And I’ve also served on the Academy board – first as a presidential officer of the CCA and then as the Academy vice president for pensions.

The Academy’s membership is broad and deep. And, of course, it embraces all practice areas. In my years volunteering for the Academy, I’ve come to really appreciate the many talents and perspectives that casualty actuaries bring to the Academy’s work and to the profession at large.

I’ve particularly enjoyed working with Gary and Wayne this past year. I’ve greatly appreciated their support for the Academy and its mission. And I look forward to working with Bob Miccolis in the future on areas where we can collaborate in the best interests of the Academy and the CAS.

And finally, by way of acknowledgements … as I hope you all know, the incoming president-elect of the Academy is Mary Miller. Mary is an exceptional casualty actuary who knows both the Academy and the CAS very well. So she’s going to be a wonderful addition to the Academy leadership team.

The mission of the Academy is to serve the public and the U.S. actuarial profession.

We are the voice of the profession in the United States. We focus on U.S. actuarial practice, public policy and professionalism. We have some 1,300 volunteers actively engaged in Academy work. Many I know are in this room today.

Each year, we hold a volunteer leadership meeting in Washington. We call it our Summer Summit. We invite in the heads of all the Academy councils and committees. So we have actuaries representing all practice areas coming together. The purpose of the summit is to wrestle with what we see as the toughest policy issues of the day.

This past July, our topic was entitlements — Social Security, Medicare, flood insurance and similar big, national programs. They’re also called mandatory spending programs. What they have in common is that they operate outside the annual budget appropriations process. You might say that they are on cruise control.

Why did we focus on these programs? They are big, and most if not all of them are in trouble.

We invited others to come work with us that day, and one of them was Senator Kent Conrad, who up until just recently was chair of the Senate Budget Committee.

A few of us had breakfast with Senator Conrad before we launched into our day. I’ll never forget what he said as he sat down directly across the table from me. He stared at me and said, “Look at the mess you folks have created.” And then after a very uncomfortable pause, he said, “Just kidding.”

Well, I have to tell you that during that pause, it was as if an electric current shot through me. It was the grain of truth, or maybe even more than a grain, that I responded to in that kidding comment. It poked at the sense of concern or even responsibility that we actuaries naturally feel when we see a large-scale financial system careening out of control.

Over the course of the day, we all came to a rather profound and fundamental realization: all these entitlement programs that are in severe financial distress are in some significant way actuarial programs.

And all I could think of when he said that was: been there, done that. We can all relate to that. We live and breathe in very technical content day in and day out. And so we all face that challenge, which is to make our message understandable to those people who need to hear what we’re saying.

Actuaries, individually and through the Academy, need to speak in relevant, understandable ways.

“Credibility is never self-declared. For both individuals and organizations, it has to be earned. Credibility is like a living organism. It grows over time. It can be killed in an instant. You have to nurture it. And then, we have a responsibility to deploy it.”

Senator Conrad went on and talked about credibility. He told us that we actuaries have credibility as truth-tellers. He said, and this is a quote, “You have a great brand. You are actuaries. You have a chance to help educate my colleagues and the American people. That is a huge opportunity and with that goes a huge responsibility. I hope you will continue your efforts. There is a lot at stake … a lot at stake.”

So that was a nice compliment, wasn’t it? But it’s also a huge challenge. Credibility – it’s the thing we need to protect, but we also need to deploy it. And that’s what the Academy is all about.

So let’s talk about credibility for just a second.

Credibility is never self-declared. For both individuals and organizations, it has to be earned.

Credibility is like a living organism. It grows over time. It can be killed in an instant. You have to nurture it. And then, we have a responsibility to deploy it.

At the Academy our credibility is fueled by our culture of objectivity. The degree of care we take in the review of our work product is enormous. The public policy work we do on your behalf should never be slanted by headline-seeking motivations. It should be grounded and balanced.

So I tell this story about Senator Conrad because it informs a couple of our strategic initiatives for this next year. One of them is focused on program or system sustainability. Now I’m going to draw a distinction between solvency and sustainability. A program can be solvent but not sustainable. This is very much the case with respect to Social Security, Medicare, flood insurance, public pension plans, and all the rest. We can look at a program that’s in some sort of balance today, or we can suggest what adjustments are needed to get it into balance. But if we’re unwilling to look beyond the immediate program to matters like future affordability, we may find that that program in the long run is not sustainable.

The second message that we took away from our time with Senator Conrad was about effective communications.

This coming year, the Academy is going to be experimenting with new ways to communicate our policy work – with the goal of improving understandability and usability.

On one level, what I’m speaking about is about the Academy and the work we do in service of the Academy’s mission.

But on another level, this is all about YOU and ME, and how WE conduct ourselves everyday as members of a respected profession.

Each of us has choices in every moment. How will I conduct myself in this difficult situation? How do I exercise sound professional judgment right here, right now? How do I serve my client or my employer and serve a profession dedicated to the public interest? How do I deliver a hard message when a hard message is called for?

The hallmark of a professional is judgment. That’s what they pay us for — to look into a complex situation and find the path forward. And judgment is called for when there just aren’t simple answers.

So I want to say thank you for your support of the Academy and for your commitment to the profession.